skip to main | skip to sidebar

Do You Believe in Magic?

Papua, New Guinea used to be a matriarchal society. Now a young mother accused of witchcraft can be burned to death in public, then masqueraded posthumously in the media while police sit pretty, failing to investigate for suspects as happened earlier this year. 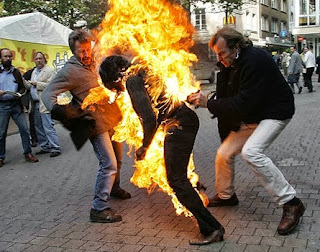 This grotesque demonstration of inhumanity came to my attention shortly after watching an incredible 16-year old young lady from Pakistan speak out on women's right to education.  This is the same cause for which Malala Yousafzai boldly took a bullet, compliments of the Taliban.

With eloquence and wisdom beyond her years, she delivered insights into conflict and the human condition, culminating in a statement on gender inequality:

"In Pakistan, when we were stopped from going to school, and that time I realized that education is very important, and education is the power for women. And that's why the terrorists are afraid of education. They do not want women to get education because then women will become more powerful..I believe in equality and I believe that there is no difference between a man and a woman. I even believe that a woman is more powerful than a man."